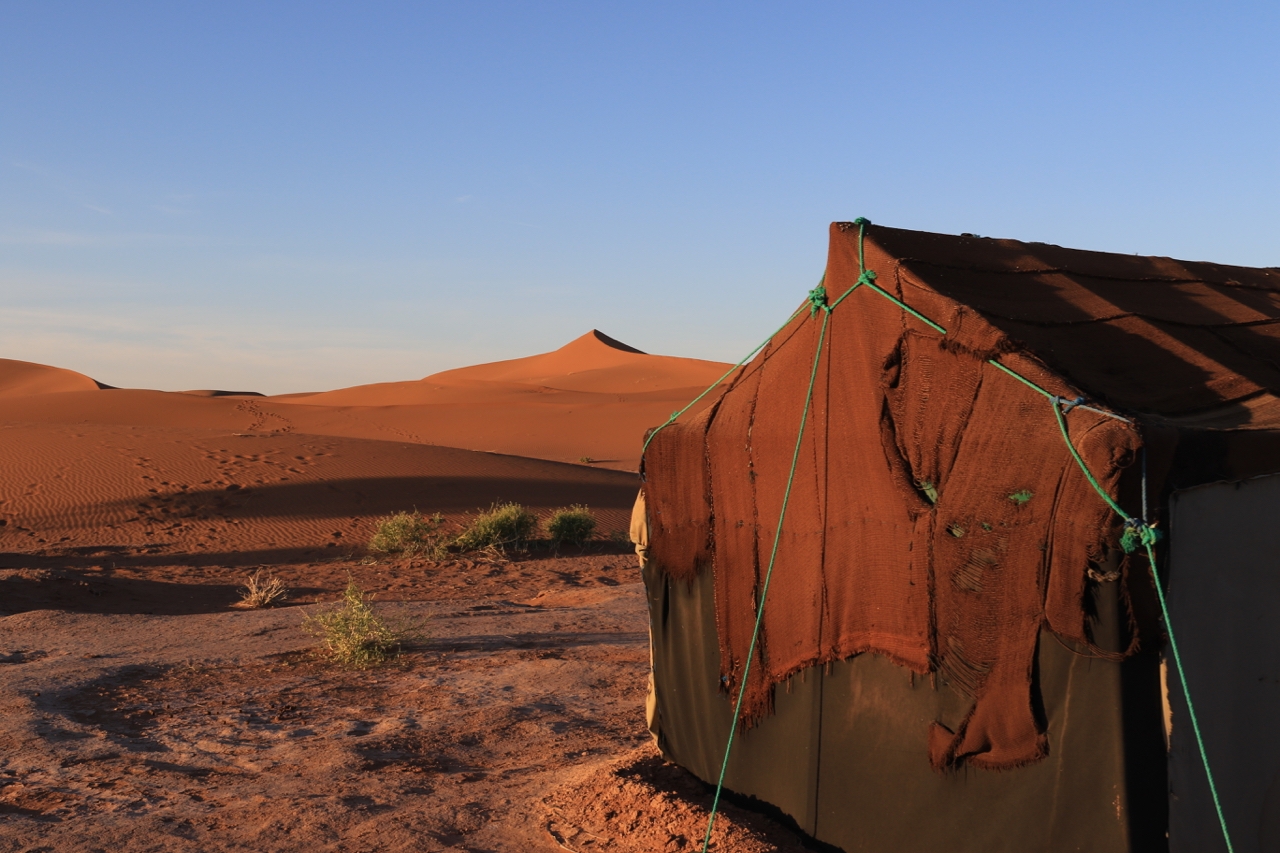 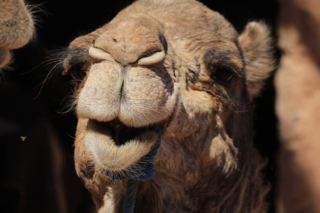 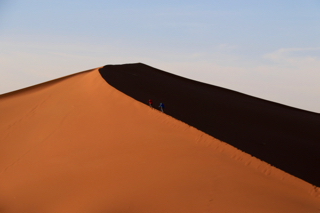 Climbing a dune at sunrise, Sahara 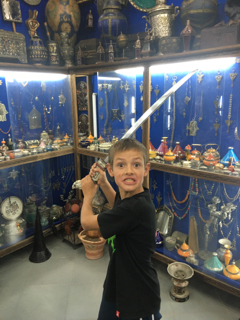 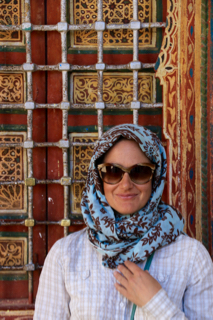 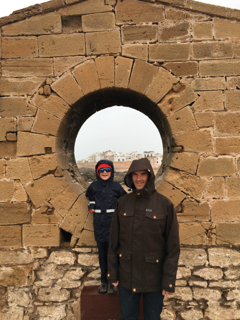 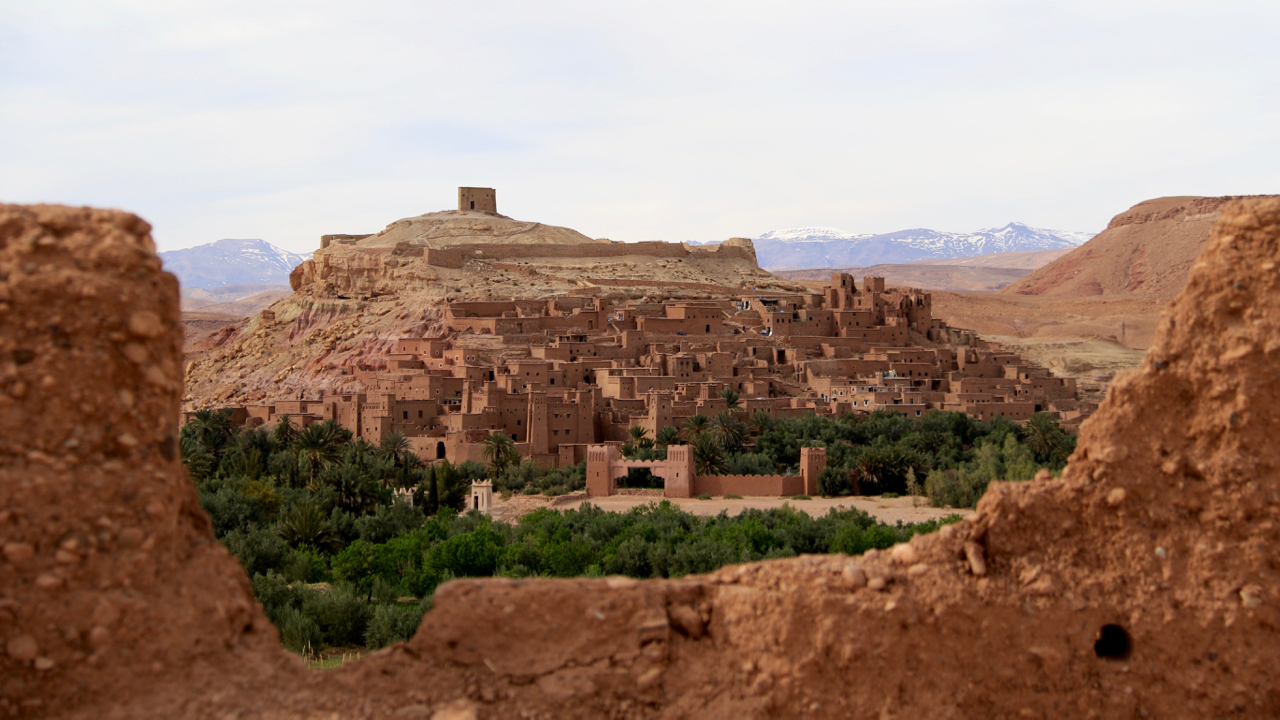 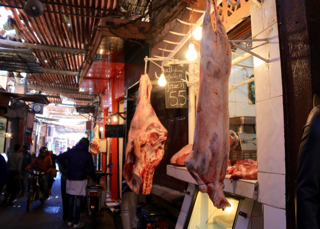 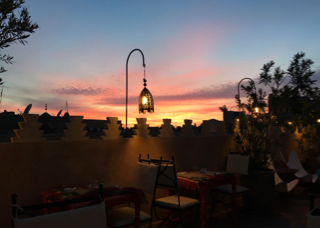 Morocco was the most amazing place we have been to so far. The Saharan desert was the best moment of my life; we got the most amazing sunset, many people get a big sandstorm in their face there so we were really lucky to be able to see that sunset. There is a lot more plants in the Saraha then I thought there would be. The mosque's calls are sometimes annoying early in the morning but sometimes during the day and at night they're pretty cool. The mountains were really cool and we got to stroke little tiny baby mountain goats. Some places (like the gardens we went to) are full of water and the other places (like the kebab store) waste their water by squirting dodgy hobos. Marrakech was fun when we were trying to find our way through the souks. I personaly liked the tagine and the couscous but there is a wide variety of other foods. The cheapest place we went to was a kebab seller on the side of the road.

Morocco was probably the first really “different” culture we've encountered this year, and it was great to be able to spend almost a month there, soaking it all up. We started with a day in Tangier, then an overnight train to Marrakech, followed by a ten day tour that took us into the Atlas Mountains and the Sahara Desert, then out to the sea at Essaouira. A couple of things that I really enjoyed from our first week or so were the peace and quiet of the graveyard of the English church in Tangier, and the hustle and bustle of the weekly nomad market in Tamegroute. The tour was a good introduction to the various landscapes and towns of southern Morocco, although, by necessity, a bit once over lightly. But then we had two weeks in Marrakech - plenty of time to explore the maze of alleys that make up the medina and start to feel a little at home.

There are a lot of great things about Morocco - the people are friendly, and the food is delicious. We felt safe most of the time, except when scooters zoomed through the narrow streets of the souk and we had to squeeze up and make sure we were all out of the way. I love the architecture and gardens, especially the traditional riads with a garden in the centre, and one of the highlights for me was the newly opened Jardin Secret - a renovated garden in the middle of the souks - but there are also beautiful mosaics and doorways just about everywhere you look. It was nice to be able to take time and appreciate things slowly - no more than one palace or garden per day and plenty of time to relax and recharge our travel batteries.

Outside the cities, the scenery in the Atlas Mountains and the Sahara Desert is spectacular, but marred a little by the litter along the sides of the roads. That was probably the most disappointing thing about Morocco - it doesn't seem like the people take the pride they should in their country - there's a lot of rubbish and all the playgrounds have been vandalised to the point of being unsafe and unusable. But those are little things, and overall my impression was of a beautiful, friendly country.

The thing that struck me first about Morocco is that it was so different from what I expected. This has been a theme for me throughout the trip so far. Even in Antarctica there was something unexpected from my impression of a frozen wasteland; grass.

Morocco, however, had the opposite. Morocco is a desert, as it is very close to the Sahara. This means there is very little rain-fall. In turn, this means it is very difficult to grow crops and grass. Grass needs a lot of water to stay alive, and water is expensive. After all this explaining, I realise I should have just said “Only the royal family has lawns in Morocco”...

In Morocco, donkeys, horses, mules and camels are a lot cheaper and easier to drive than cars. (most of the time, especially for the Berber people living in the mountains). We saw a lot of motorbikes as well. Apparently they are slightly better adapted to the cities many narrow streets. The worst experience I can think of with these motor-killers is when we were in Marrakech's souks (arabic for markets). These streets are famed for their narrowness. This is especially un-nerving when a motor-killer comes speeding towards you at stupid-kilometres-per-hour and you have no room to get out of the way!

As I mentioned before, Morocco is one of the many countries that border the Sahara. We were lucky enough to spend a night in one of the most amazing places on earth. For me, that night was as cool as it would be to stand on the top of Mount Everest, or to land on the Moon. We saw the sun slowly set, sending the light and dark sides of the dunes away to leave the grey-yellow colour of a night in the desert.

As well as going out into the Sahara, we also ventured into the surprisingly cold High Atlas Mountains. Here we did a walk up to a mountain mosque, drank fresh spring water from a mountain aqua-duct and played with some kids whose only english words were "hello" , "yes" and "no".

In just eight weeks we've gone from ice bergs in Antarctica to the golden sand in the Sahara. This trip continues to deliver special moments.

As soon as we got swarmed by hustlers as we stepped off the boat in Tangiers it was clear: we are in Morocco now! Some places have a distinctive smell, some place have a signature sound, but in Morocco they have decided to carve out their own piece of the spectrum - it seems the whole place is a beautiful brown-ochre colour, the earth and the houses, the dunes, even the public buses in Marrakesh.

Travelling around during the first part of our time here was a whirlwind of highlights - trekking in the High Atlas mountains and staying in a traditional Berber house; visiting the historic old city of Ait-Ben-Haddou (better known as Yunkai to Game of Thrones fans), riding a camel and then, much less comfortably, a 4WD ride into the Sahara, followed by a magical sunset we got to enjoy from the top of one of the giant sand dunes, where it's so quiet it feels like you can hear forever (this is easily as close as I've ever felt to being in the middle of nowhere, assuming you'll allow me to categorise Antarctica as feeling like another planet!); seeing goats climbing trees to eat the berries; and a delicious lunch of freshly caught and simply cooked fish in Essaouera. Our guides Aziz and Mustafa did a great job of looking after us and tailoring the trip to the slightly different things which grab you as an 11-year-old or 8-year old tourist - including teaching the boys to write and speak a bit of Arabic. Mushi Moushkil!

The last couple of weeks staying in a big riad back in Marrakesh was in theory a chance to catch up on work etc. That didn't quite work out as planned, partly because of crappy internet which made even audio calls difficult and also the challenge of timezones when we were literally on the other side of the planet from most of the people I wanted to speak with.

But, we did manage to achieve something that I hope we'll do a few times on this trip, which is flipping briefly out of tourist mode and enjoying a place a little bit more like a local might, starting to normalise the noise and the dust and the motorbikes. This means spending a bit longer in one place, but it's worth it. We found a local, close to our first riad and ended up getting dinner takeaway (as many do, after the last call to prayer) three times during our stay, complementing that with a salad made from vegetables also bought from the nearest souk stall. It was great simple food for a price that had the decimal point in the wrong place compared to tourist prices. Elsewhere we found a funky cafe in the new part of the city which was a nice place to escape for lunch a couple of times when the medina got a bit too claustrophobic.

But, we didn't completely stop being tourists - things to remember in Marrakesh include the impossible blues of the Garden Majorelle (once owned by Yves Saint Laurant); a fun and delicious cooking class at Clock Cafe; and the delightful views over the old city from the top of the Photography Museum (where we were joined by our friends Nik and Ange from London) or the tower in the recently restored Jardin Secret.

During our time here I've noticed that I've stopped trying to think of this trip as a single thing and hold all of it in my head. It's good. It means I head to Italy feeling less anxious - no reason to stress about October while it's still April, eh?