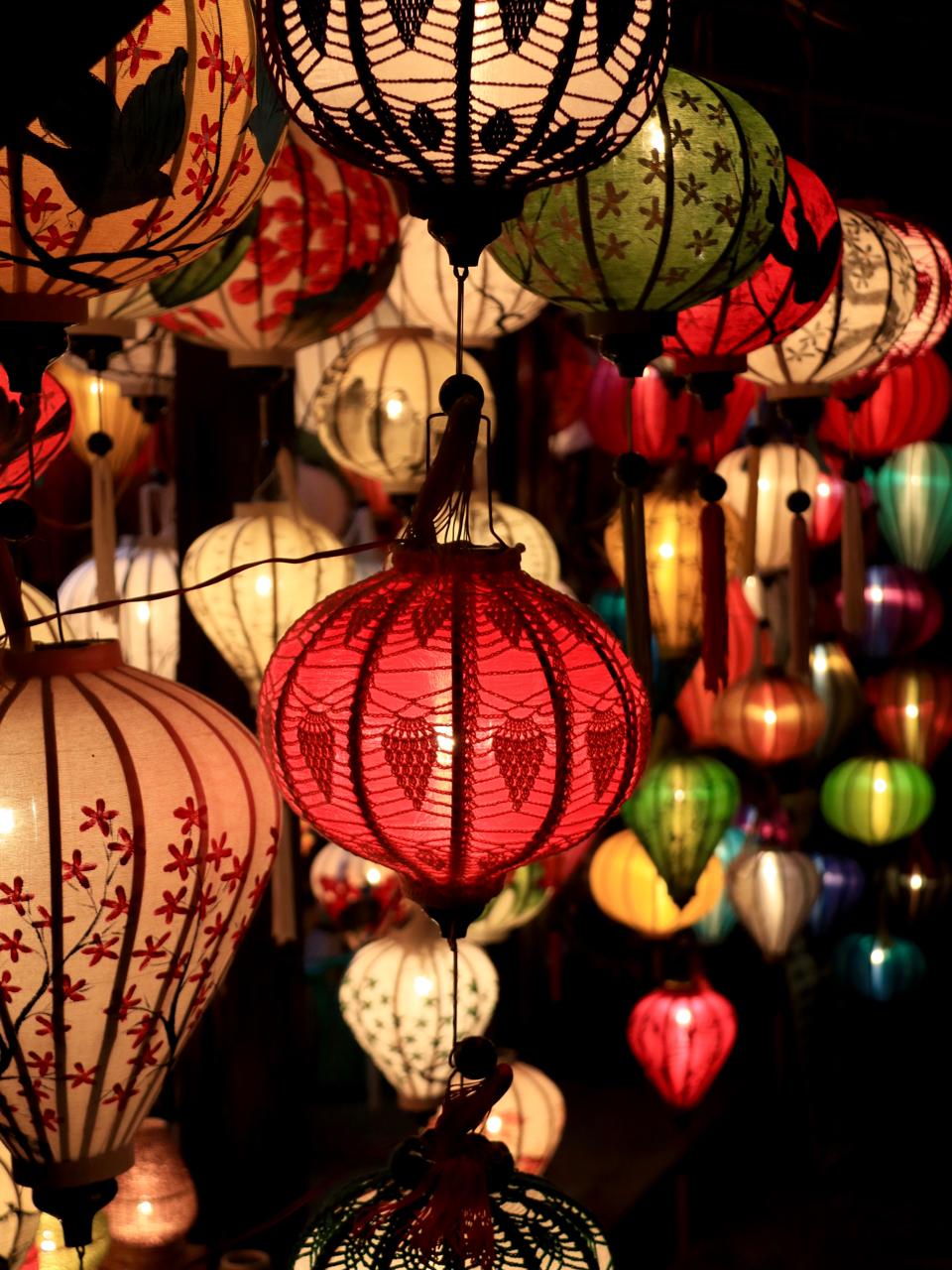 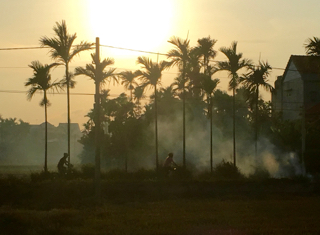 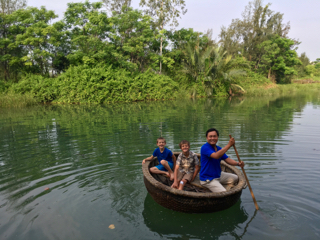 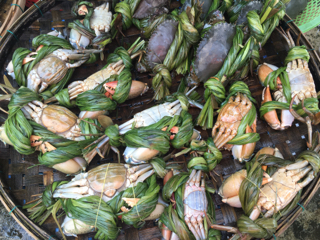 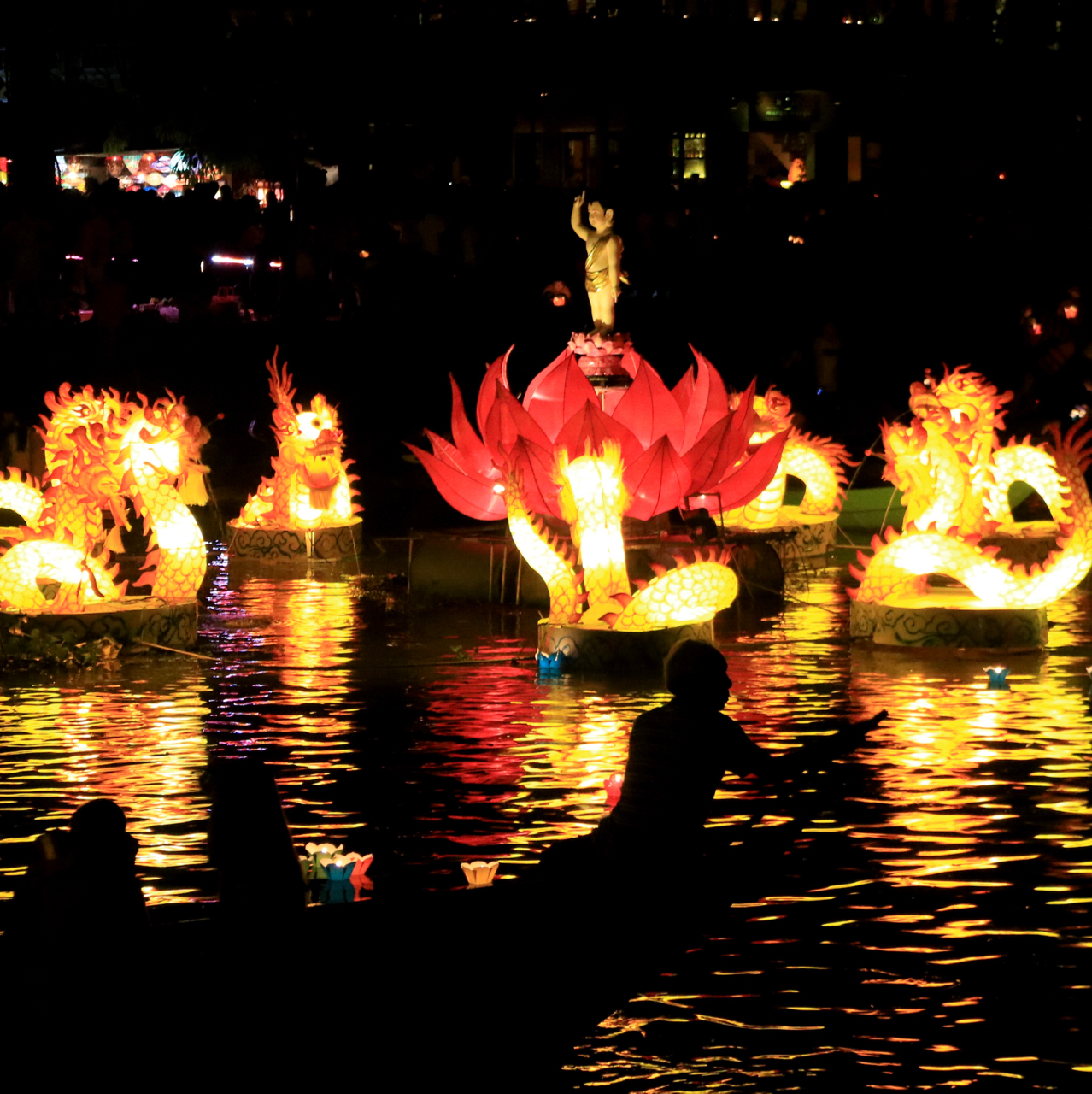 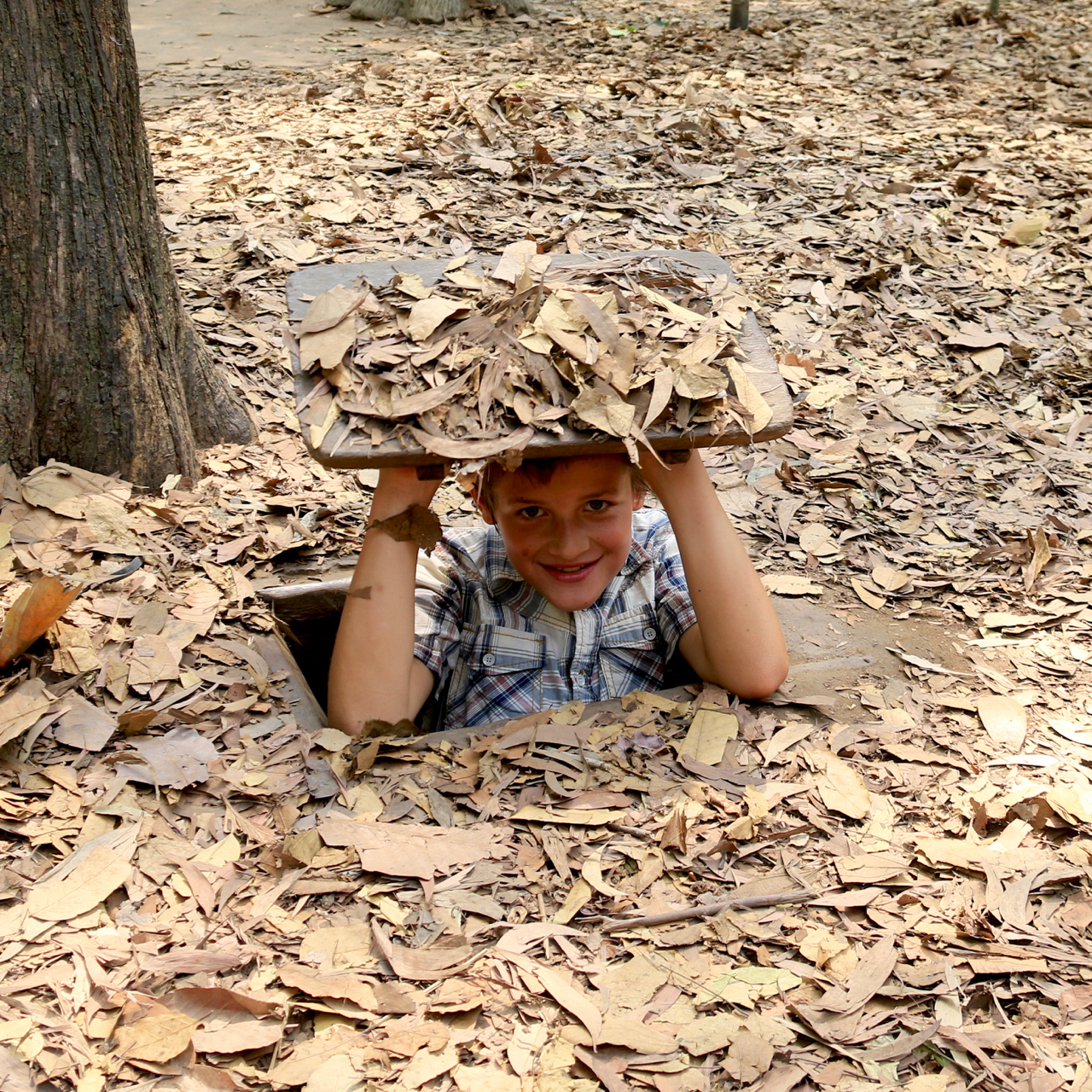 As we were cycling, normally we were on little streets and sometimes those streets were in the middle of rice fields and there were little paths raised up from the level of the rice paddies. The path that we were cycling on was the highest up and the widest. So with animals, (water buffalo, etc) or not, it was pretty cool.

When we stayed in the Mekong Delta we went over 29 bridges (and to top that off we did those 29 bridges in one day) and a total of 4 boat trips (a ferry to carry our bikes and us across a river, a tour boat to take us to the home stay, 3 boat trips). At the home stay Jacob and I made 2 hand rails without any hammers no nails, unless you count pieces of wood with nails in them. And we caught about 60 cicadas it was really fun.

In total I thought that the over all rating for Vietnam was 8/10. I would recommend it to everybody who has enough money to go there (once you get there everything there is cheap). If you do go there don't be fooled by all of the Vietnamese people with masks so don't go buying one because I started healthy and ended healthy and if we did buy the masks then mum will have taken a photo of us wearing them.

The thing I'll remember most about Vietnam is the temperature. It was hot. And sticky. And, especially when we were cycling, some days there was no escape. We quickly realised that this leg of the trip was going to be about getting comfortable with being uncomfortable, starting right from the first afternoon/evening in Hồ Chí Minh, a city of 10m people and 7m scooters, all of them tooting. Once we normalised it a bit, it was actually nice. I've never appreciated a simple lemonade, or even an iced tea, quite as much.

The two things I'll remember most about Vietnam are the temperature and the food. We ate well - beautiful fresh salads, spring rolls of almost every possible variety and, perhaps most memorably, simple Banh Mi which could have been 10x the price and still be good value. We also did our third cooking class, adding some South East Asian options to our repertoire, alongside Moroccan and Italian. Yum! Luckily Vietnam is also famous for its cheap tailors, which is timely as inexplicably my shorts have shrunk during the first four months of our trip.

The three things I'll remember most about Vietnam are the temperature, the food and the lights. After the cycle trip we spent a week recovering in a villa with a small pool about 10 mins cycle outside of the lovely Old Town of Hội An. Our time there coincided with the Buddha Festival, so the lanterns, which I think are a permanent feature, were even more prominent. On the Saturday night we followed the procession down to the river, where the local school kids and old aunties were selling paper lotus flowers with candles in them, which were all floated on the river. Beautiful. And, at the other end of the spectrum, our night deep in the Mekong Delta, where there were no lights to speak of, just cicadas. We counted the rotors and waited for them to arrive.

Amongst the things I'll remember most about Vietnam are such diverse things as: the temperature, the food, the lights and the propaganda. On our first day cycling we visited the Củ Chi tunnels, which are maintained as a local symbol of victory in the American War. I have to say, seeing the McDonalds now located in Hồ Chí Minh Square, and Air Force One parked on the runway in Hanoi, I wondered if it might actually be too soon to call. Obama was in town to, amongst other things, announce the lifting of the arms embargo that has been in place since the '70s. Facebook and Twitter are still blocked though. We'll see. In the meantime, all around the country there were flags and billboards reminding everybody to vote in the election which was held the last weekend we were there. Far too early every morning the loud speakers would blare with announcements. The results haven't been announced yet, as I write, but this one is not too soon to call (since the constitution guarantees the Communist Party a majority). Remarkable.

There are many things I'll remember about a great couple of weeks in Vietnam. :-p

Whose brilliant idea was it to do a week's cycling in the tropics, at the hottest time of year? That's right, mine. And it was brilliant, at least once we'd got a little used to the heat and humidity.

We started in Ho Chi Minh City / Saigon. The names are used interchangeably, with people maybe favouring Saigon ever so slightly. It's a big city with lots of people and almost as many scooters on the roads (and footpaths). The heat quickly reduced our plans to a walk around town, some lunch, then back to the hotel for a swim. How were we going to cycle in this?

We found out the next day. Our guide, Tiet, collected us from the hotel and we drove to the rendezvous on the outskirts of town, where we met our support crew and got on our bikes for our first ride to the Cu Chi Tunnels. It was only 20km or so, and we had plenty of water and stopped for “limonata” in a rubber tree plantation, but we missed the signs of Jacob getting heat stroke, and so he was sick at lunch time. But after a few minutes of sitting in the air conditioned van, he recovered, and we were able to explore the tunnels. Rowan thought it similar to Gallipoli, in that we were visiting a site where NZ was on the losing side, but the difference to me was that Gallipoli felt like a memorial to the “Johnnies and the Mehmets” lying side by side, whereas the tunnels still seemed more of a dominance display. Maybe the distance of time.

From there, we headed to the Mekong Delta, where we spent the next couple of days cycling along paths beside waterways big and small and through plantations of bananas, coconuts, jackfruit and durians. We took a boat to a homestay for one night, passing barges laden with river sand, their gunwales barely above the waterline, and other boats piled with provisions - vegetables, rice, huge blocks of ice. For me, the highlight of the night at the homestay was watching the boys catching the cicadas that descended just before sunset, the loudest I've ever heard, and feeding them to the cats. Tiet supplied a bottle of red Russian sparkling wine to celebrate our wedding anniversary.

Leaving the Delta, we had an afternoon in Saigon, where we visited the War Remnants Museum. The boys are typical boys, and were excited to see the tanks, fighter jets and artillery shells, but I hope they also came away a little sobered by some of the photographs on display. I found it really hard to look at them, and was glad we had to leave before I really cried.

We flew to Da Nang and drove south to Hoi An. The contrast is amazing. Da Nang is a resort town - beaches and neon - while Hoi An is low-rise with old wooden buildings lining the streets, Japanese, Chinese and Vietnamese details showing in the architecture. We walked through the town in the morning with Tiet, then later in the afternoon, we cycled through the rice paddies, vegetable plots and fish farms before boarding a boat for a barbecue on the river. Heading back into town, we passed through a flotilla of lanterns, a Saturday night tradition.

Our last day of cycling took us to My Son, a Hindu temple dating back 700 years. It was unfortunately heavily damaged in the war, but the buildings still standing give some idea of how beautiful it once was.

Tiet left us the next day, and we moved to a homestay a little out of town, where we spent a week relaxing and catching up on school and work. And eating. The food in Vietnam could very well be consistently the best we've had this year - fresh and flavourful. We did a little bit of tourism - floating our own lanterns on the river on Saturday night, taking a cooking class - but for the most part, we just enjoyed a relaxed few days, serenaded by propaganda and nationalistic songs from the neighbourhood loudspeaker.

The first thing I remember thinking in Vietnam is 'Wow, why is everything so dirty and broken?' But after spending almost 3 weeks here, I've started to realise how beautiful it really is.

The first thing we did in Vietnam was a week's cycling. This route, with the assistance of a minibus on the longer days, took us from just outside Hồ Chí Minh City to a nice hotel in the centre of Hội An, passing through many small, Karaoke-ridden villages on the way (there was apparently a karaoke festival going on at the time, but I reckon it was just the guys down the road shouting at each other). The thing with biking in Vietnam is that the climate is extremely hot and humid, reaching over 40˚ some days! but with heat comes relief; especially at the many "drinks stop time" we did roughly every 5kms! The prospect of repeating that particular trip is quite scary! But at the end of it all, I'm glad we did it, because otherwise we would never have got the "local" experience that I'm going to remember for the rest of my life.

The food in Vietnam was definitely a highlight of the whole trip so far. The daily Pho (a type of beef noodle soup) featured in Kieran's breakfast every day (by the end the waitress didn't even ask for his order), as well as spring rolls and soups galore. On one of the last days in Hội An we did a cooking class called "Herbs and Spices" (a great recommendation for anybody planning a trip in Vietnam) also featuring spring rolls, but with lots of other things.

In Hội An, there was a lantern festival on the river, with floating candles lowered into the water with rather crude long poles with baskets precariously balanced on the end. They also had all the power down and the whole town was lit by beautifully crafted silk lanterns. All the local school-children were out selling prayer-candles to all the passers-by, both tourist and local.