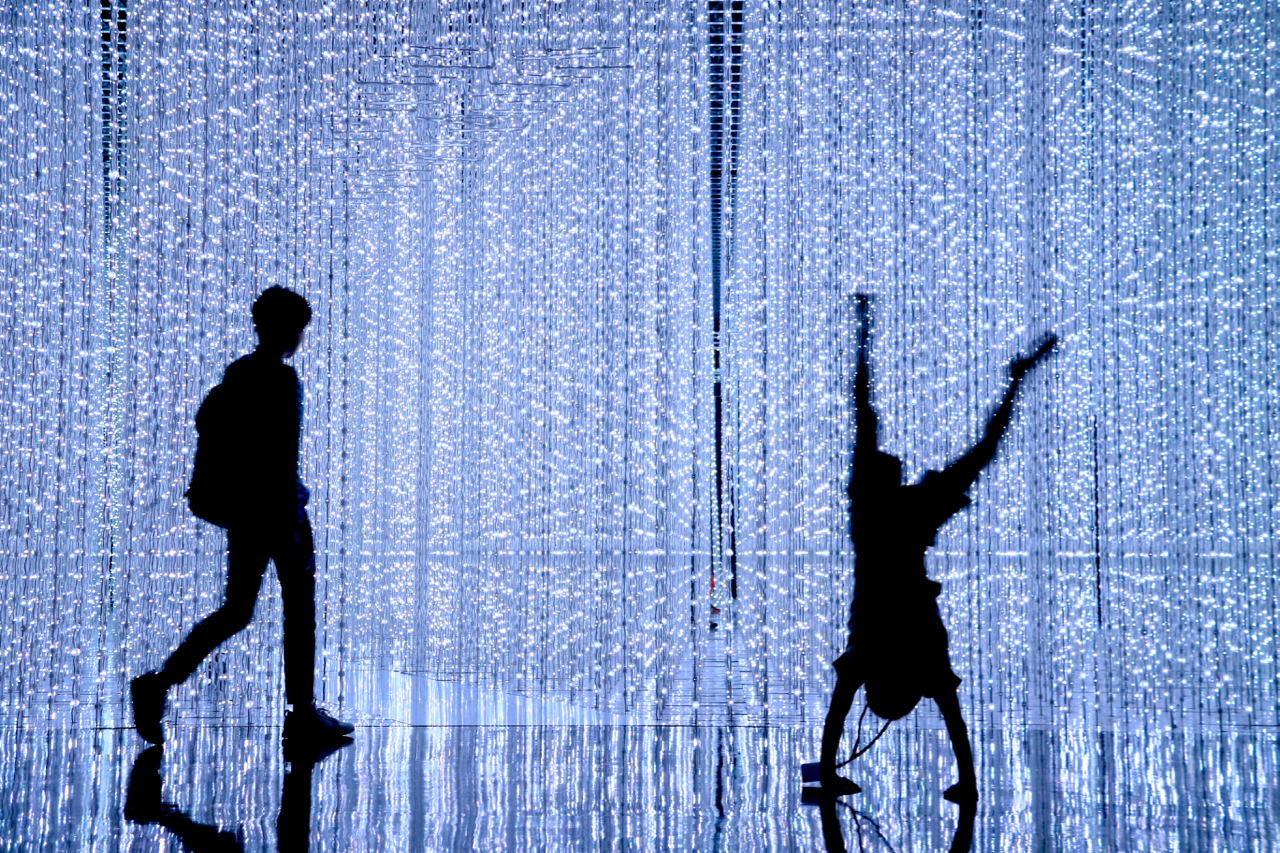 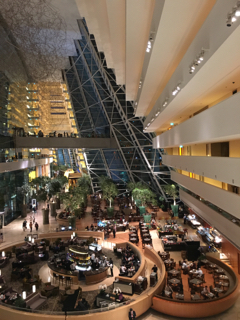 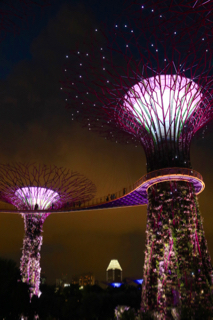 Gardens By The Bay 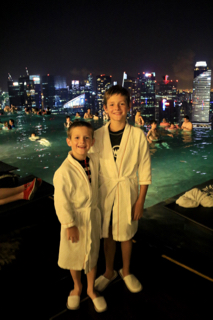 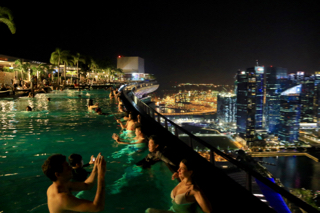 In Singapore there are so many fun places that I think we probably could have spent the whole year here, just exploring. Sadly though, we were only there a week, so we had to cram in only the best things to do. Two of these are the Night Safari and the ArtScience museum.

We visited the Night Safari after enjoying a day exploring the local area around our accommodation. As soon as we walked in the gate, we were greeted by a performance of fire-breathers and dancers, in the far corner of the entrance courtyard. As mum and dad were waiting for our tickets, Kieran and I explored the entrance. A slightly surprising thing greeted Kieran when he went to the toilet; the walls of the bathroom were made of water! After the tickets were obtained we went through the Tigers mouth gate into the main Safari Tram station. But we didn't get on because we wanted to explore the walking trails before the tram ride, to see the animals hidden behind walls that are not viewable from the tram in our own time, like the clouded leopard, the Indian crocodiles, and the Pelicans. After that, we finally got on the tram and did the circuit to see more animals like the giant African tapir and the elephants and rinos. Then finally we took a taxi home and collapsed into bed.

After moving to the Marina Bay Sands hotel, we saw a light/water show right out the front door of the hotel. We went there on the first night, and it was awesome. We were lucky enough to get there relatively early, so got front row centre spots! The jets were perfectly timed. They had water spreaders as well as jets, that had images projected onto them from behind. It even had spotlights and lasers on top of the hotel that really improved the overall experience. The show was called Wonder-Full, and that is the best word I can think of to describe it!

The food in Singapore was definitely a highlight for me, because I am a real sucker for rice and noodles. On the first few nights of our trip in Singapore we were staying in the local housing district, so we got all the best local food, but as soon as we moved to MBS we moved away from all of the wonderful food we had gotten used to. On the first night we went to a local "hawker market", or food court. They had exotic stalls; "braised duck breast" and "spice stand", and then some slightly disappointing ones as well; "western food counter" and "coke stand" among them. My favourite dish of all was prawn noodles.

Our first stop in Asia was Singapore, nominally so we could sort out our visas for Vietnam, China and Mongolia, which we will visit next, but actually to allow us to eat all the things.

The first few days we stayed in a condo in Lavender, where we made the most of some of the near-by options. We started as we intended to continue, with a big feed at the local outdoor hawker stall on the first night, complete with mango drinks, and over the rest of the week tried a number of others around the city, with satay, chicken rice, fried carrot cake and lime juices all featuring prominently. I managed to get the boys hooked on pork bao, one of my addictions. We stopped by Stone Cold Ice Creamery in Orchard Road - perfect after a hot sticky day exploring the city on foot. Emily found a great vegetarian restaurant in Little India. And, we had dim sum one night at the new Tim Ho Wan (a recent import from Hong Kong). We also asked those we met up with to take us to their favourite places. Benny and Priscilla from NZTE took me for lunch to a great Taiwanese restaurant (it poured down as we were walking there, so I also got a guided tour of the covered walkways and malls en route); Hugh from JFDI took our combined families to a traditonal restaurant on the 60th floor of the UOB building, where we ate duck, drank tea served out of pots with silly long spouts and enjoyed a view over the whole city/island; and our friends from our time in the UK, Chesca, Stuart and the "other" Emily, took us to a Turkish restaurant in Arab Street and, when all of the food got a bit much, a healthier and lighter brunch near the Botanic Gardens. Yum!

Then, for the weekend, we checked in for some five-star luxury time at the Marina Bay Sands. A Singaporean friend I was talking to earlier in the week described it as their embarrassing teenage tattoo, and I can see what he means. It is ostentatious. But, I've wanted to stay here for as long as I've been coming regularly to Singapore, and it was good to finally have an excuse. The main selling point is the amazing infinity pool on the 57th floor “SkyPark” - which is a bit like swimming in a giant transparent zeppelin hovering over the city. There is also a gym on the 55th floor, which might be the best view I have while working out this year (although the air conditioning was much appreciated after suffering through a run around the bay outside earlier in the week). There are heaps of other shamelessly tourist things to do near-by: the light show in Marina Bay every night; the Rain Oculus "fountain" at the Shoppes (given some extra drama in our case!); and the slightly surreal Gardens By The Bay, with two giant temperature controlled domes, and the weird but amazing Super Trees which light up spectacularly every evening. The highlight was the ArtScience Museum which we visited on the final morning while waiting for our flight later in the day. They have an incredible new exhibition called Future Worlds. It's difficult to describe in words, and frustrating to try and capture in a photograph (even with Kieran's instinctive cart-wheel response to the lights and sounds), because it's something you immerse yourself in, and participate in. We soaked up a couple of hours there, and could have happily stayed longer.

Singapore is an Asian city with an accessible Western API. I've become increasingly fond of it as I've spent more time there over the last few years and it's become a bit more familiar. But next we're heading to a series of places which are completely new to all of us, starting with Ho Chi Minh in Vietnam where, if we can get our heads around it, it will be somehow even hotter. Bring it!

In Singapore we stayed in a massive tri-tower monument with a boat on top, and on top of the boat (on the 57th floor) is a pool called the 'infinity' pool because it looks like it has no edge. At Marina Bay Sands they also make the towels into elephants and puppy sculptures. Sadly they haven't mastered any other animals yet [ed: he asked the concierge, who confirmed this].

We also saw the spectacular super tree light show and it was 'spectacular'. At Gardens By The Bay there is a kids garden which isn't even a garden it is a water park with tipping buckets, water jets and spinning poles, all of which are spraying water everywhere. We loved running around.

My previous trips to Singapore have been child-free visits to my friends Chesca and Stuart, and a couple of stop-overs and transits. This was the first time I've visited with the kids. So, this meant a lot less shopping. Not that there is any room in our bags anyway!

There were a few things I wanted to do there with the boys - I'd been to the Night Safari a few years ago and had wanted to take the kids ever since (they loved it), and the Gardens by the Bay (great fun) and the ArtScience Museum (fantastic) rounded out the top three - but apart from those, we didn't really have many sightseeing plans.

Not that we were lost for things to do. We rode the MRT a lot, which kept the boys entertained, caught up with friends, and ate. Singapore is a great place for eating, and there's such a wide variety of delicious food that it's tough to decide where to go. That's where catching up with friends who live there is great, giving you options you might not otherwise discover on TripAdvisor or FourSquare.

We had a bit of drama when I dropped my sunglasses into the whirlpool of the Rain Oculus at Marina Bay, but I got them back the next morning - in one piece and unscratched, which was astounding when you see the amount of water that falls through the fountain.

Possibly the only thing I'd change about our week in Singapore, if we did it again (apart from keeping a tighter hold on my sunnies), is spending more time away from air conditioning, to acclimatise ourselves better for a weeks cycling in the heat in Vietnam.