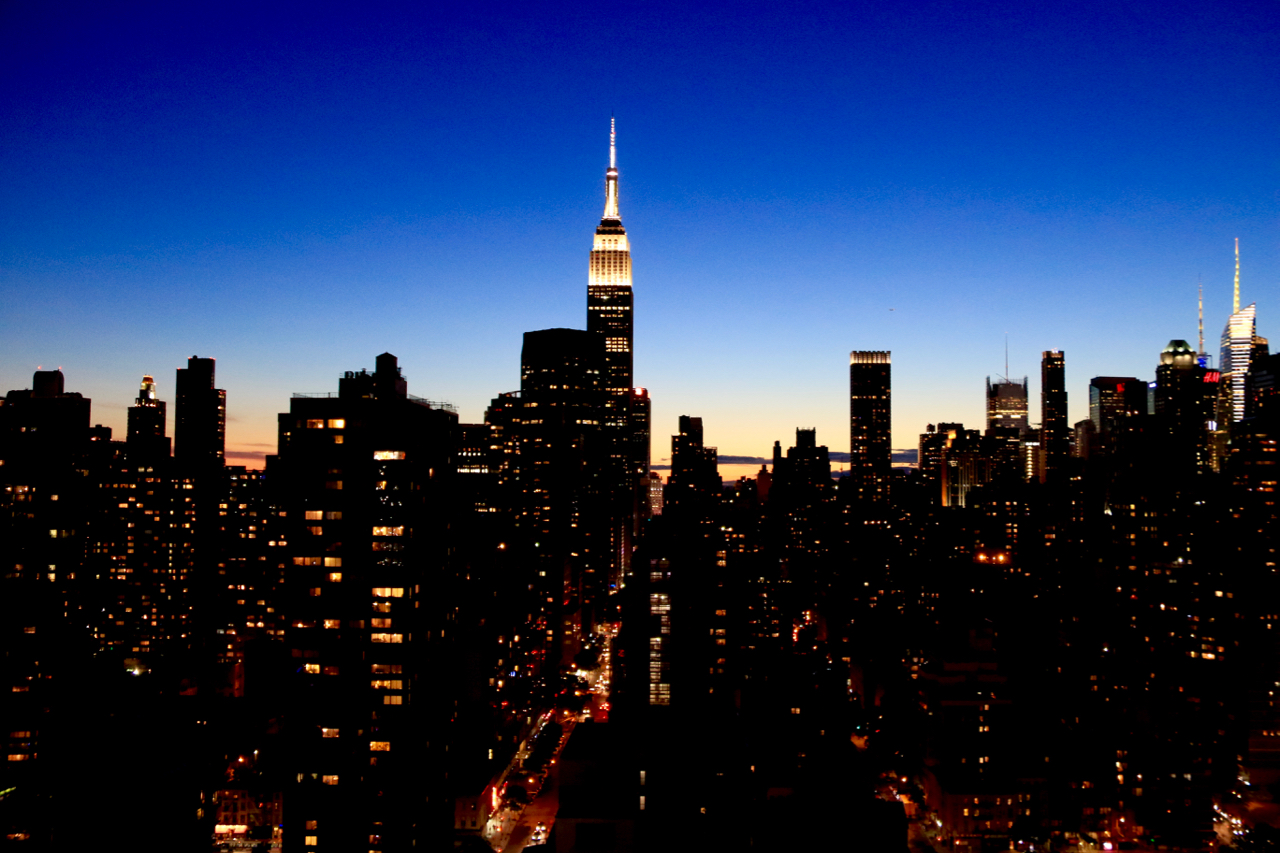 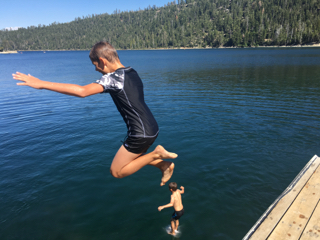 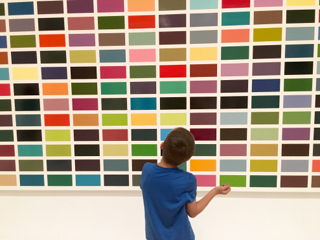 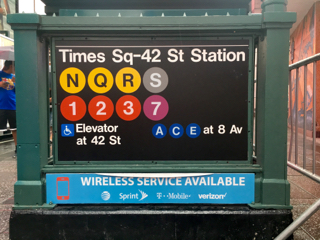 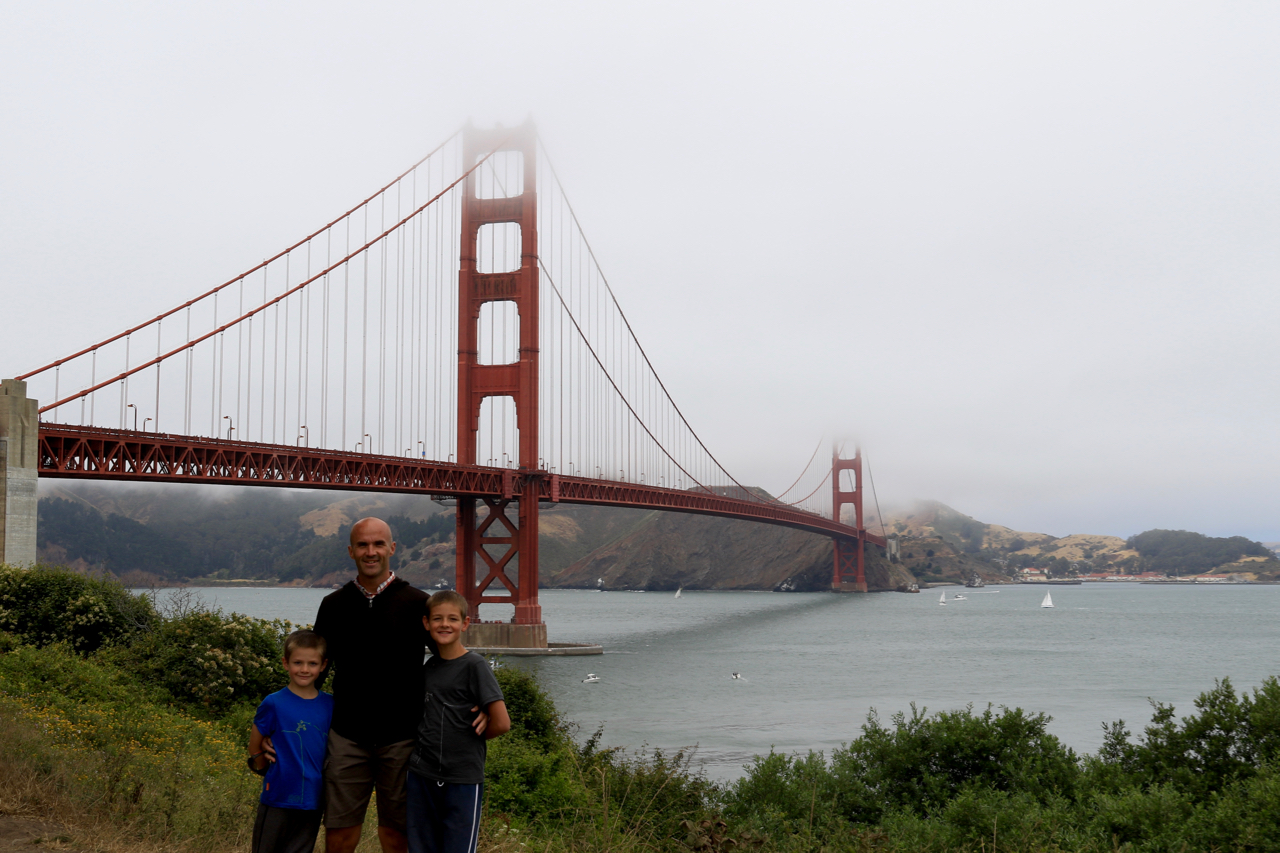 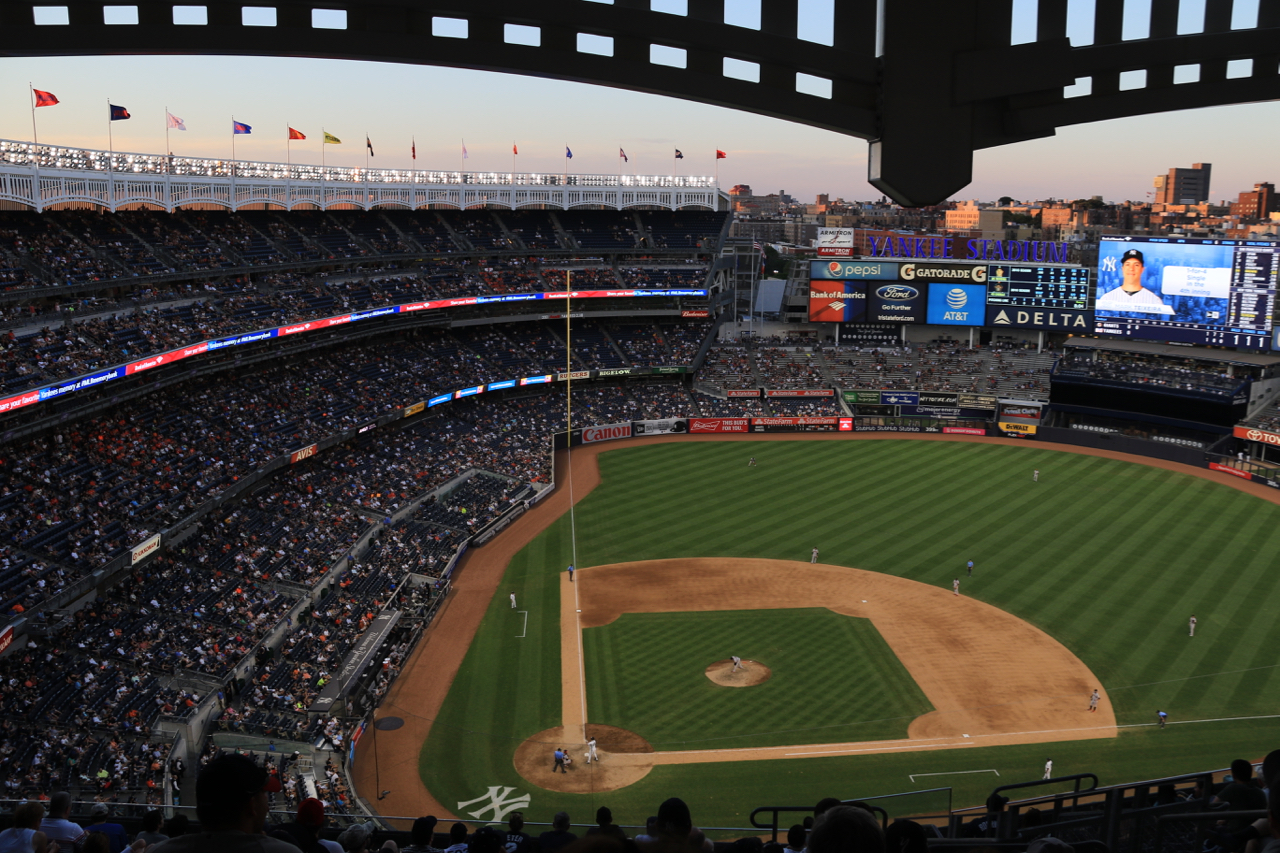 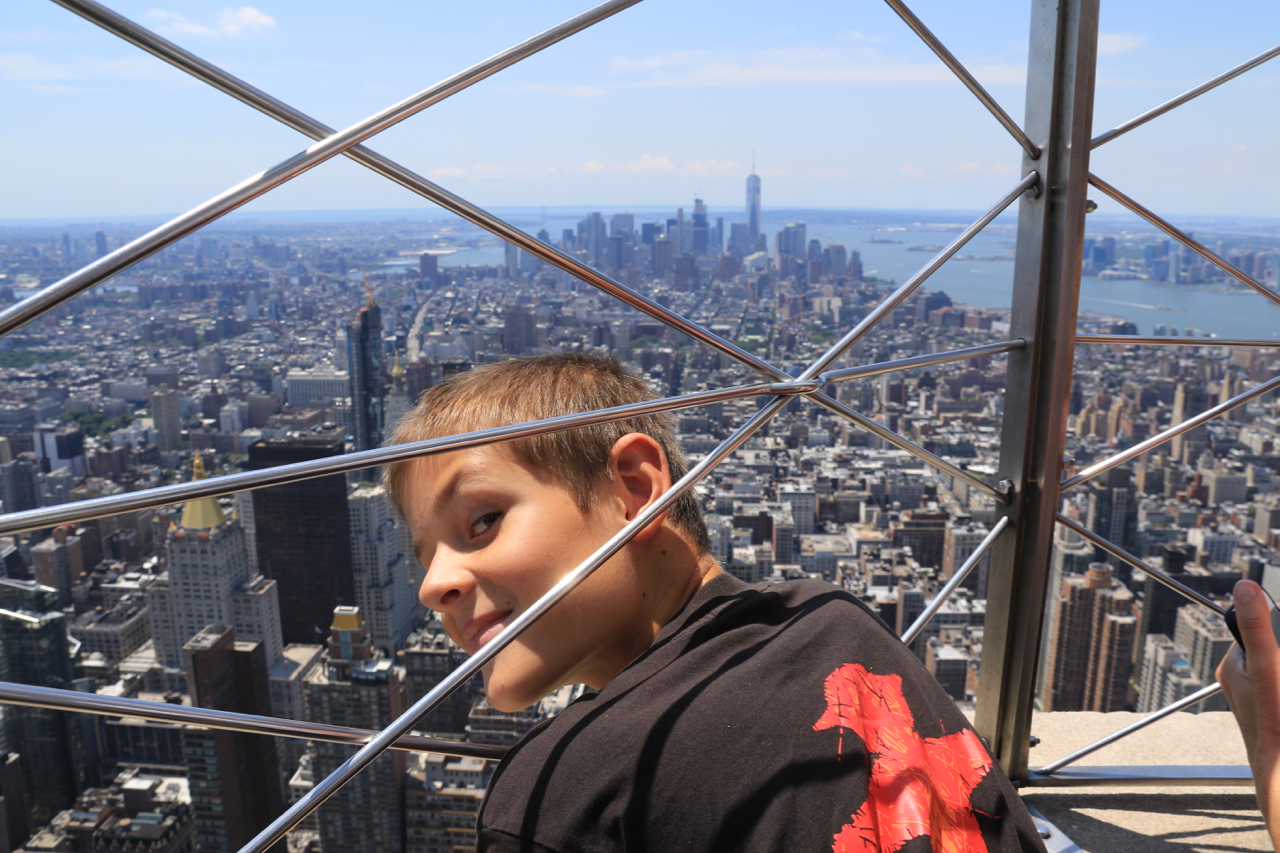 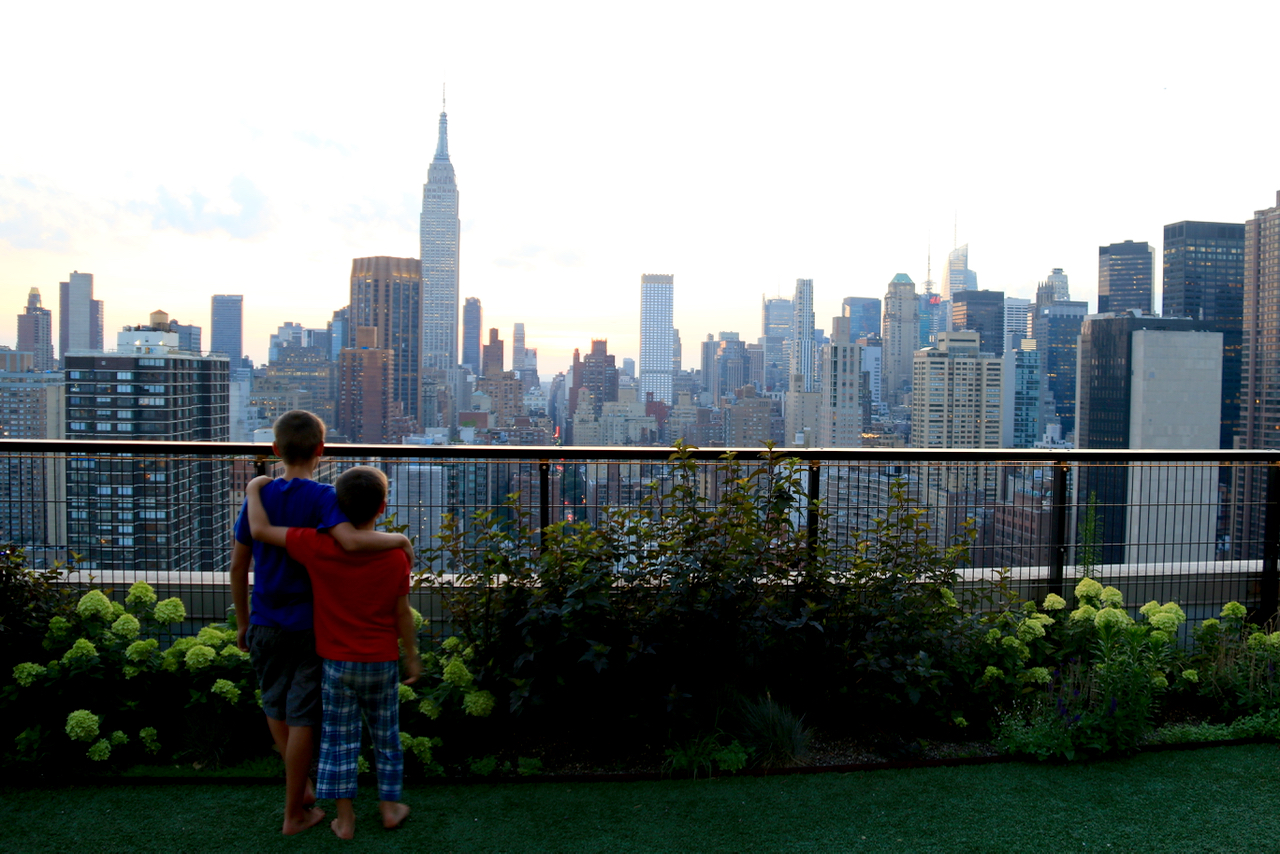 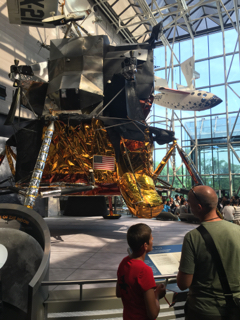 Let's get the best thing about New York out of the way straight up: we didn't have to pack anything larger than an overnight bag for a whole month! This year, that's a big thing. Even if we hadn't done anything else for a month, that would've been a win.

But we did. We started off with a week in California, based in Berkeley, catching up with American cousins, and visiting the Exploratorium, Golden Gate Bridge, and SFMOMA. We also spent a couple of nights at Lake Tahoe, which was lovely, despite a rather sticky ear worm courtesy of Elemeno P. And we went to our first ever baseball game, a local derby, with the Giants convincingly beaten by Oakland.

We flew to New York in time to catch the fireworks on the East River for July 4. We were very lucky that our apartment building was perfectly placed for the show (although we couldn't see it from our apartment), meaning that when we were soaked by a rain shower 20 minutes before it was due to start, we had time to go home and get changed and still be back for the display.

New York has more than enough to keep our family busy for a month. We spent quite a lot of time in various playgrounds, where the boys enjoyed the water features, a great way to cool down in the hottest month on record. When we could drag them away, we managed a good cross-section of what the city has to offer: the Empire State Building; the Highline park; the Circleline cruise; another baseball game; Brooklyn Bridge; cycling up the Hudson River Greenway; hotdogs from street vendors; dinner at a diner. We didn't get to as many museums as I'd have liked - next time, Whitney and MoMA and some of the smaller ones - but we did visit and enjoy the Met, Guggenheim, Cooper Hewitt, and World Trade Center Memorial museums. A definite museum highlight was spending the night at the American Museum of Natural History - exploring the dinosaur exhibit by torchlight; enjoying mostly-empty galleries; sleeping under the suspended blue whale.

We made time for a few trips out of the city. We spent time with friends old and new in the Hamptons, Greenwich and Mamaroneck, all Kiwis to varying degrees. And we had a very warm 36 hours in Washington DC - a couple of museums (Air and Space, and the Spy Museum), the White House and memorials to various great men (particular favourites were Teddy Roosevelt and Martin Luther King). Special mention here to Amtrak - the conductors on the return trip were very good with the boys, and even let them make a couple of station announcements.

Other entertainment included two movies, one set in New York (Ghostbusters), and one from home (Hunt for the Wilderpeople), and one Broadway show (Matilda, lots of fun). We saw some great live music, too: John Brothers Piano Company in Oakland; the Not-Its in Madison Square Park; Billy Joel at Madison Square Garden; and Flight of the Conchords in Central Park. All fabulous concerts, and the last two were made even better by being child free (thanks Olivia!) Not to mention the election cycle - it'd be funny if it wasn't so scary.

I could see myself spending more time in New York in the near future, but I think I'd leave the boys at home - more art galleries and more shopping!

In America we spent a whole month just in one place, apart from day trips to Washington, and the suburbs around New York City. But before that we were in San Francisco, seeing things like the Golden Gate Bridge. We also went to SFMOMA and the explOratorium. In NYC we went the obvious things, like the Empire State Building, Central Park, the Statue of Liberty and the 911 memorial, but also some unexpected things, like a burger shop with a hotel built around it (literally), and probably the best diner in all of New York (the food was restaurant standard)!

One of my favourite place in all of New York is the Hecksher playground in the southern end of Central Park. It is a playground with water as the swings, slides and bridges. It is made up of three towers. There is a little platform on the big boulder next to the playground, which the water comes from. There are two jets that it comes out of. Then it flows down a path to the first tower. It goes down some steps and goes to the next tower. It loops around the second tower, before going to the third. It then goes to the first again, before flowing down a long path to the jet area. Here there are two areas; the fog area and the falls area. In the fog area there are jets that make mist, and in the falls area there are seven jets that you can use to refill your water gun. There is also a dry playground with a sandpit and climbing frames, and an area that is great for playing soccer.

We also went to the Met, the Grand Central train station and the Mo Maths maths museum. We went to the Cooper Hewitt design museum and Madison Square Park. We watched the Independence Day Macy's fireworks and the Matilda musical. We ate almost everything you can, and figured out why they call it the city that never sleeps.

But all good things must come to an end, before morphing into something better, because next we fly to Panama for a transfer to Rio!!!!!

Welcome back to travel town. In the U.S.A its been really nice. And like always I have a list of things to write about...

1. In New York there was a playground in Central Park called the Hecksher playground. It's a playground that's made up of a really long continuous waterline and in overview there's a part with a whole lot of taps that go on off on off and sometimes they're really strong. There's a path that goes down from them but the path isn't on a very steep angle. After it's gone in a straight path there's a tower and the path goes around a tower with some steps and they're a really good place to fill up your water gun or bottle. Then they move to the side and go around another tower with no steps three more times, then around the first tower. Then it just keeps going round until it gets to an open space, where it goes down a drain.

2. Most of the playgrounds we went to in New York were actually water playgrounds and they had little nozzles that sprayed water out of them, and for instance there was a playground that was right next to our apartment and it had water in it. I called it the maple leaf playground because in the middle of the court there was a big maple leaf (which is the logo of New York parks). There was a playground that we went to at Union Square that was really cool. It had a big water jet in the middle and some slides. There were also funnels that you could talk into that went to different parts of the park. Off to the side was a big dome that you climbed up and slid down. We had slightly sweaty hands that gave us a better grip which made it easier to climb up. Another good park was at Governors Island. It had a really big climbing frame made out of logs and ropes and we climbed over that in about a minute. Also there was another playground there that had three slides - one was really long. They were really hot and you went faster if you held your legs up. When Dad got to the end of the big slide, he slipped off and fell on his bum!

3. At Madison Square Park, there's a playground that's a water playground, and there's lots of squirrels there as well. We watched a concert called the Not Its. It was a kids concert and I got a guitar pick from them. They were a really good band and I danced a lot. After the concert, we went to the Lego shop nearby and I made a dragon, a hover board and a mixel. Then we went to the museum of maths which had a lot of different things like how do you make a big square out of two smaller squares. That was Pythagoras theorem. I rode a trike with square wheels around a track. The track wasn't flat, it was all bumpy.

4. When we were in California we went to Lake Tahoe and we stayed in a tourist cabin. We went to Eagle Falls it had a really good view and if any of you are going to go there, I'd recommend it. We swam in the lake and I jumped in off a really high wharf. I had fun at the cabin. I built a house out of Jenga blocks, scrabble pieces and chess pieces.

New York, we had been reliably informed, was waiting for us. Walking through a crowd, the village was aglow. The concrete jungle where dreams are made of. Big lights will inspire you. Kaleidoscope of loud. There's nothing you can't do. If you can make it there. Etc etc. It’s all true!

"If you see something, say something” the posters shout all over the city. We’ve seen a lot. There is time and space here to say hardly anything. We filled every day. The list of things we did is daunting to recall. But still it feels like we barely scratched the surface of the surface.

We were definitely waiting for New York, having deferred a lot of things until we got there. It was great to spend a good amount of time in one place, unpack, breath out, order food in English, clear my inbox, go for a run or a bike ride, buy some new clothes and shoes, catch up with some old friends (and make some new ones!), watch some baseball or sit in a park to escape the heat and watch the crowd. Just to walk around the city and soak it all up.

One of the motivations for this trip was to ensure that the boys didn't grow up thinking Motueka was a big place. Watching them cope fine with all of the things that a place like New York can throw at you makes it all seem worthwhile.