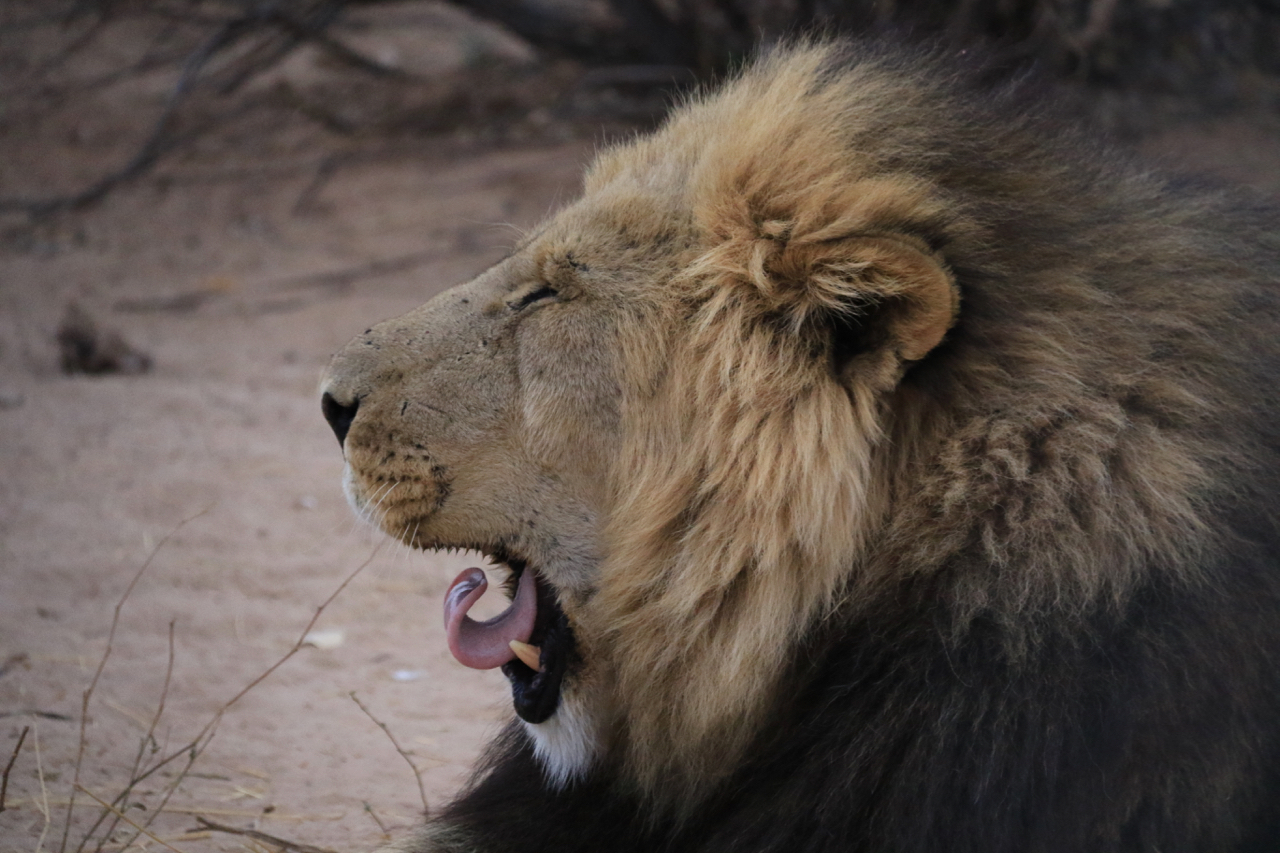 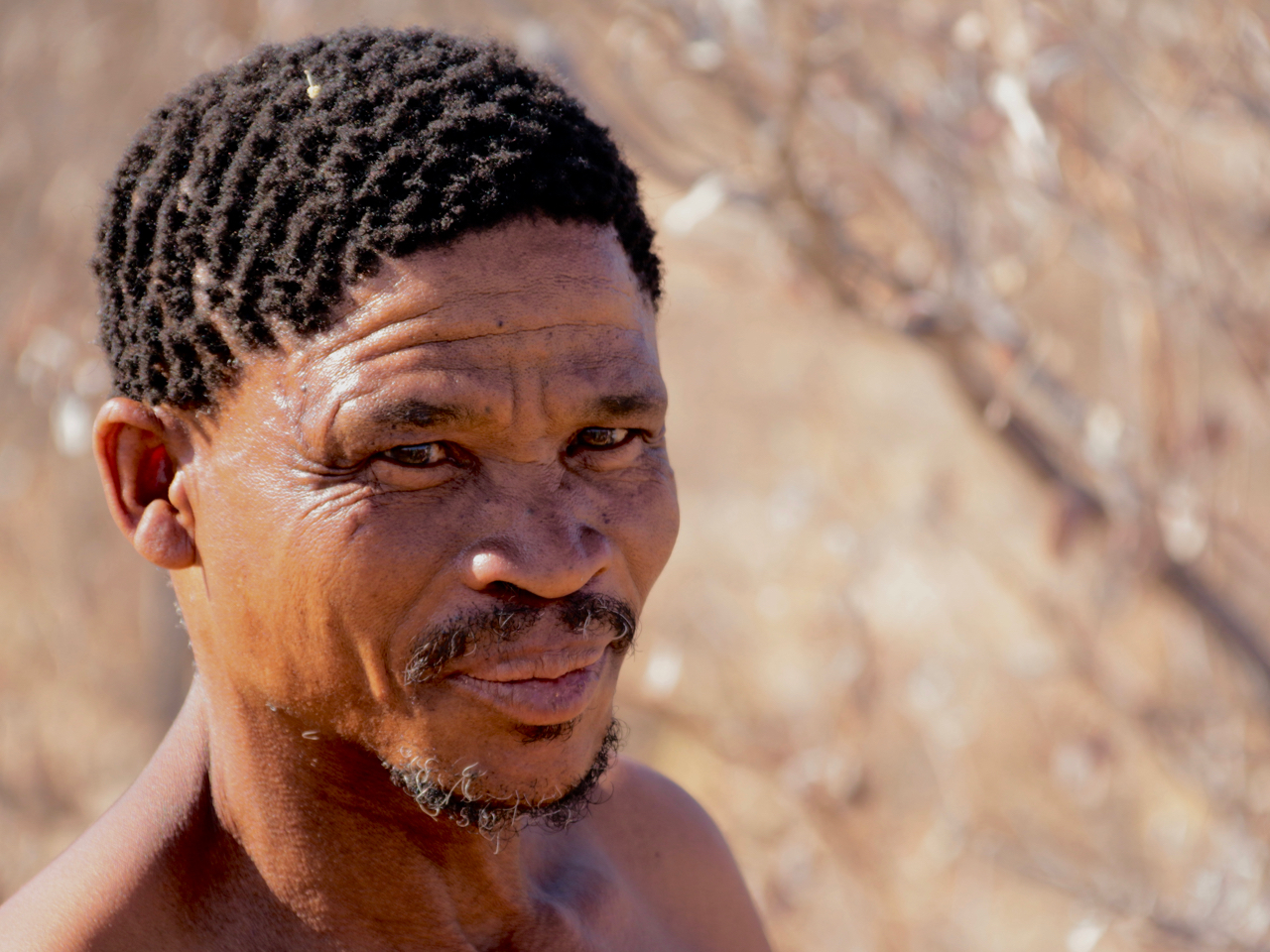 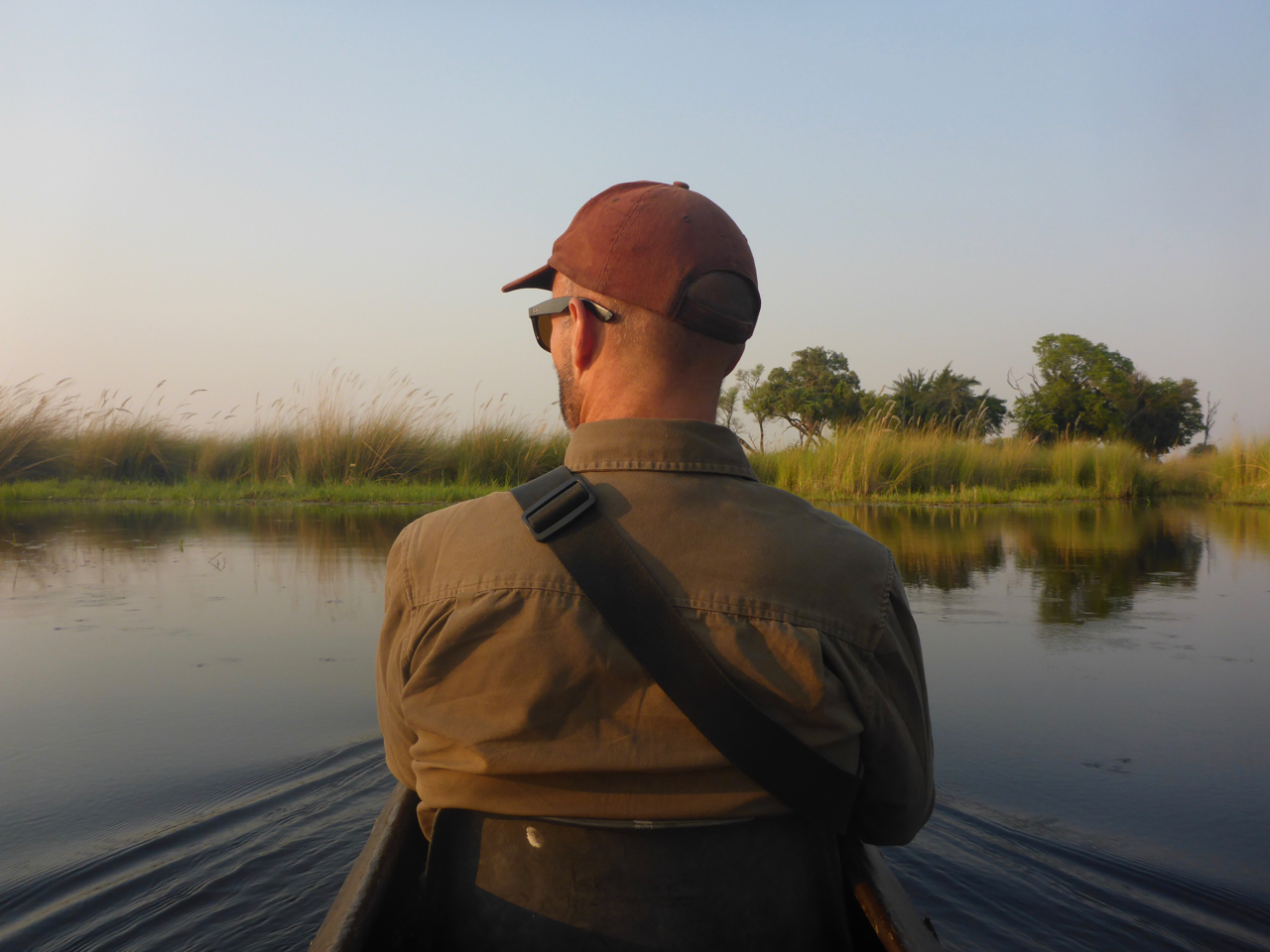 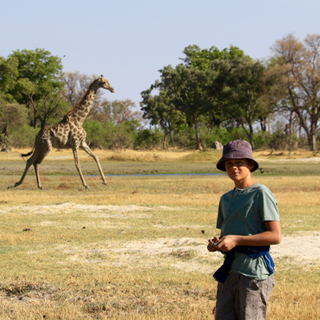 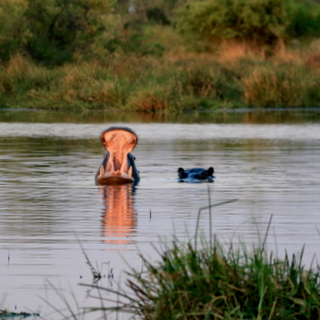 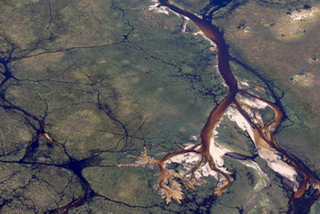 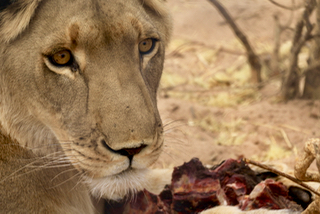 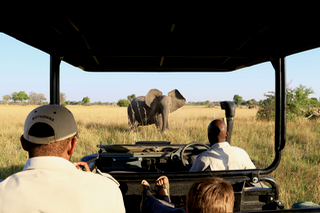 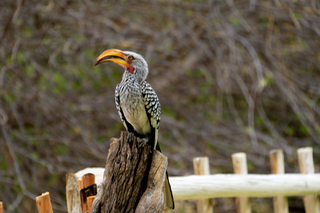 Like always I've got four things to write about for Botswana.

1. Grasslands. Grasslands was a big difference from Ants Nest. We got to see a leopard and lions. Another way it was different was we got to see different animals. We didn't see any blesboks, but we did see secretary birds. There was a water hole outside the camp and we did an off-road game drive. There were also some bushmen and a bush boy who was only six years old and he could shoot a bow better than Jacob. They showed us how to make string and how to make a trap from that string and how to make fire. We had some bushman potatoes which tasted like potatoes but they were a lot bigger.

2. Grasslands animals. In Grasslands we saw lots of different animals. We saw our first ostrich, and we saw lions and mum and I saw a snake track. The lions were only in an enclosure, they also had leopards and African wild dogs in enclosures. We went into the wild dog enclosure. They didn't eat us because they were having their dinner. We saw a lioness by herself who had been rejected as a cub because all the other cubs had died and their parents didn't want to look after her any more so they took her away and hand raised her. The lioness gave her handler lots and lots of cuddles. We also saw a skronky horned antelope.

3. Footsteps. At Footsteps we saw four male lions and one female lion. We saw a hundred different types of birds. There were lots of elephants and giraffes. Footsteps is in the Okavango Delta and there were lots of hippos. We got charged by elephants twice. The food was delicious, but the camp didn't have any electricity so they cooked over an open fire and it was really hot anyway. We saw baby hyenas and they're really really really cute.

4. Activities. At footsteps we had afternoon activities. The first afternoon we did shooting. Jacob loved it so much that he wanted to do it the second afternoon but that was the day that we went out and poled the mokoros to the other side and got supplies for the camp. That was also the day that we got charged by an elephant. On our very last day there, Jacob and I shot really really really shaken up Diet Coke cans. Jacob hit the top of his can so it turned into a rocket. I hit mine in the middle and it made a giant gash in the side. We also played football. We won all the games. In fact, some of the games were unfair because there were three adults on the other team, and only one adult on our team.

When we were in Antarctica, we worried that we'd started the year with an unassailable highlight, and everything after it would seem a little disappointing. Luckily, the highlights keep coming, and our time in Botswana was no exception.

We divided our week between the Kalahari Desert and the Okavango Delta, quite a contrast. At Grasslands Lodge in the Kalahari, we didn't see a huge amount of wildlife, but we did get to spend time with a local family of bushmen, who showed us some of the skills they have used to live in the area as hunters and gatherers for thousands of years. It was the end of the dry season, so most of the trees and bushes looked the same to me - seemingly dead branches with a few dry leaves hanging on - but to the women in the family, there was food all around: a bushman's potato here, a cucumber-like tuber there, nuts over there. We had a little feast cooked in the embers of a fire lit using a couple of cork wood sticks while the men made string from another plant and then they showed us how they set a snare for small animals, and where the beetle lives to poison the arrows used to hunt bigger game. In the evening, they showed us some dances and skipping games, which we tried our hand at, with some of us more successful than others. For someone whose first exposure to Botswana was through the movie The Gods Must Be Crazy, it was totally cool.

From Grasslands, we headed to Footsteps camp in the Okavango Delta. This was archetypal safari country - on the drive from the airstrip to the camp, we saw elephants, lions, hippos and antelopes galore. But to be totally honest, the wildlife wasn't the only thing that attracted me to this camp - the description on the website that read "parents can enjoy some peace and quiet whilst our ... guide entertains the children with a multitude of activities" might have had something to do with it!

We were never disappointed with our wildlife viewing. Over the four days we were there, we saw at least 100 elephants, ranging in age from old matriarchs to babies about a month old. And not just out and about, either - elephants regularly visited the camp at night, and we even had a couple visit during the day, at one stage trapping us in our tents. Other highlights included baby hyaenas, a lioness eating a reedbuck, and the David-McPhail-as-Rob-Muldoon heh-heh-hehs of the hippos.

The true highlight, though, was the staff, who went out of their way to make us feel at home. The camp had no running water (except to flush the toilets) and only solar power, but we had warm showers from buckets and gourmet food cooked over an open fire, including cakes and bread as good as I've had anywhere. And the boys had so much fun while we were relaxing - they made up funny animals, learned how to pole mokoro canoes, played football, ticked off animals and (100) birds on their checklists, and shot cans and balloons with an air rifle. Definitely something we'll remember.

Botswana was really just an extension to our wonderful African adventure, but it was the best part yet! We flew from O.R. Tambo, Johannesburg, to Maun, Botswana, before boarding a tiny five seater to the middle of nowhere, or to the people there, the Grasslands safari camp. Here we saw ostrich, lions*, leopards**, as well as everything else we have seen previously. We go on game drives every day, and see the local San bushmen a lot. They taught how to make fire find food and moisture, trap animals for meat and skins, and, in the case of their six year old son, learning how to shoot a poisoned arrow thirty meters! Although I could not accomplish this feat, he could shoot perfectly, every time. His parents, mothers especially, were very keen to share the traditional food of the bushmen, like a root spotted from a vine as thick as a pencil, hidden in the thorns of a shrub. We were sad to leave, but excited for what the second half of our Botswana adventure would bring.

We landed at the Shinde airstrip with smiles on our faces. We drove for a while to 'the crossing'; two tiny mokoro canoes. We crossed the river, then got on another truck to our camp. On the way we saw plenty of elephants, as well as three *** lions that they have only seen once before this year. We got to the camp, and promptly started a game of football, with us and Mozeeh, (pronounced Moses), as well as one of the other guides, versus four of the others. We won 13-9, and went on to win all three other games as well. That night, mum and dad were woken up by a herd of elephant trumpeting and mud bathing right outside their tent. But we didn't wake up. The next morning, and all of the other mornings after that, we woke up, had breakfast, got on a truck and drove somewhere, spotting towers of giraffes and sounders of warthogs, as well as a pride of lions and herd after herd of elephants, zebra and antelope. We also ended firing a gun for the first time. By the end of the week we were shooting full cans of Coca-Cola, and videoing them in slo-mo for the memory. After that we left to the airstrip, and flew to Maun, and then to Jo'burg for a connecting flight to Cairo, Egypt.

*the lions were kept in huge enclosures for the safety of the guests, but we happened to be there on one of two feeding days a week (the lions go through three donkeys every week on two feeding days).

**the leopards have the same sort of enclosure as the lions, but much smaller, and roofed because of their incredible jumping ability

***there are four lions in that group, but we think the other one was hunting at the time

The Kalahari and Okavango are names familiar to anybody who has watched any David Attenborough documentaries. And the animals that live here are the same you can see in zoos around the world: lions and elephants, hippos and jackals, giraffe and zebra, hyena and warthogs. Not to mention an endless list of antelopes from wildebeest to impala.

There is nothing much to distinguish the things we saw and the photos we took. Except that we were there and experienced these unforgettable things first hand. And, actually, I think, that is everything.

We spent the first few nights at a lodge just outside of the Kalahari Game Reserve, located next to a watering hole, so every morning and evening we could sit and quietly watch a wide range of animals come and feed.

From there we flew to Shinde in the Okavango Delta, seeing dry desert turn into green and blue of waterways under us. We spent the next four nights on safari, camping well off the beaten track, unless you're referring to the tracks beaten by hippos and elephants.

It might seem strange, but some of the things I'll remember most vividly from Botswana are the sounds:

Ever since we spent too many hours waiting at the train station in Montpellier in March the alarm tone on my phone has been the SNCF jingle. But for three days in the Kalahari that was not required. Instead we had actual lions roaring, which felt completely primal.

Our first night in the Okavango we were woken shortly after heading to bed by an elephant scratching around immediately outside our tent. I could hear my heart beating as we watched the large silhouette in the dim light.

Or, even more remarkably, we finally found a way to make the boys sit still and quiet. All it took was a lion or three 5m away from the truck. Or a family group of maybe 30 elephants with one young male who was keen to come and shake his ears at us. Or four hyena pups we found one evening in their den with no adults around to warn them against being curious.

One of the things we've got right in planning this trip is our pacing. It's as we transition from one place to another that we really appreciate it. Botswana fits that description. We have enjoyed it and made the most of it and leave before we are over it.

So, how do we follow up a unique experience like this? Silly question. We go to Egypt...!