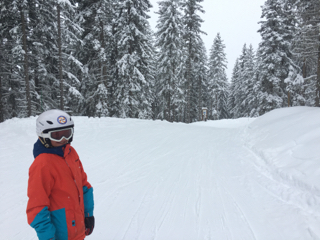 Jacob in the trees, Méribel 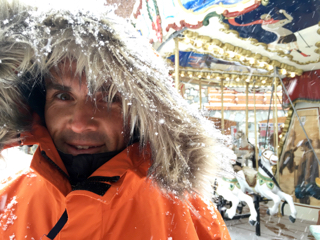 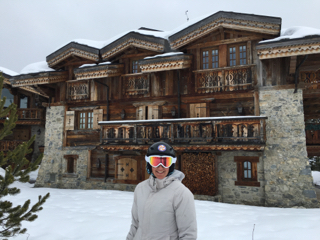 A beautiful old chalet in Courchevel

Danger! At the top of Mont Vallon 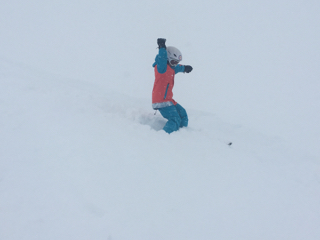 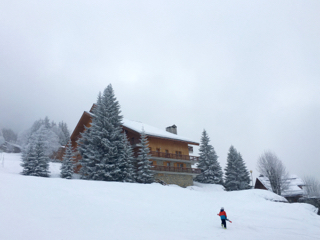 Jacob heading out for another day

We've had a fantastic time in France. The boys both love skiing, and Jacob has mostly recovered from breaking his bones last year, despite a tentative start. We got lots of snow, so had our first real experience of skiing in proper powder snow - fun to ski, and even more fun watching Kieran ski through snow up to his waist. If I can suppress my maternal instincts enough, it's great watching them try out jumps and zip through trees. I'm definitely holding the boys back on the slopes now, but they're generous about it, usually.

We covered a lot of ground over the fortnight. The 3 Vallées bills itself as the largest ski area in the world, and it felt like it. But we got to the farthest points, and the highest and lowest points, encouraged by the opportunity to earn “Escapades” badges along the way and the promise of a certificate when we'd got them all. And then we ran out of time to actually get the certificate before we left!

All that skiing meant I've improved a lot. I didn't start skiing until relatively late, and had a bad crash early on which set me back. But having some lessons in NZ and a couple of fortnights away and my skill and confidence have really come along. I also burnt a lot of calories, but Cat, our wonderful chalet host, made sure I wasn't in calorie deficit at the end of the day. Between her and the crew of the ship we went to Antarctica on, I've been totally spoilt at the start of our trip, and I will miss being looked after.

My highlight, though, was definitely trying skijoring, which I've been fascinated with since I read an article about it a couple of years ago. For those who don't know, it's basically being towed along on skis behind a horse (or dogs!). One version of it has a rider on the horse, and the skier being towed on a rope and having to collect rings and jump jumps, a little like waterskiing. We did a slightly more sedate version, where we were basically the sledge behind the horse and steered with long reins. Didn't have a whole lot of control, especially when Okies decided he didn't want to be last in the queue up the hill and took off, but we all enjoyed it immensely.

We were all sad to leave Méribel (especially as there was another big dump of snow as we were leaving) but we will no doubt be back in future years. The boys already have a list of runs they want to ski when we do.

Well... France has been the best experience ever for me, so I've improved a lot in skiing and Hopscotch (which is an iPad app with easy coding like scratch but with less blocks and the blocks are easier to under stand). But its been a blast here in France and Switzerland.

I made a snow man and it eventually turned into a lump of snow on our balcony but it did look pretty cool, but the main reason we came here was to ski!!!!!!!!

My favourite bit was doing my first full black run (the colours are green, blue, red and black, for beginners, easy, hard and extra hard, there is also the Vertical Xperience which is basically at the steepest it is 80 degree incline, but we didn't do that because you have to be over 21 to be able to do it).

My least favourite bit is when I had a massive crash at the bottom of the run called col. That was definitely the best crash that any of us had skiing.

It was sad leaving Méribel, so I'll leave at that and I'l talk again in my Spain post.

The original idea for this trip was to spend a month each living in 12 different places. We ended up compromising on that, partly for practical reasons but mostly because there were just too many places we wanted to visit during the year.

However, near the top of my original list was Méribel in the French Alps, just across the border from Switzerland. I was here 12 years ago, and have wanted to come back ever since. To spend a fortnight here with Em and the boys as part of this trip has been a real treat.

Skiing is one of the few things that all four of us enjoy together at roughly the same ability level. Actually that might have to be revised after the last few days, but my old knees will thank me for not trying to keep up with the boys any more, and anyway by the end they were starting to get tired of waiting for me at the bottom of steeper runs (although they do still prefer to have me there to pick them up and dust them off when they over reach and face plant).

Les Trois-Vallées covers a huge area - actually half a dozen separate ski fields all interlinked. We only took one day off, and still left lots of runs undone for next time. And it's high - we skied on one col which was 3240m (higher than all but a few of the mountains in NZ).

Our chalet, right in the middle of the small village, was a short walk from the start of the pistes in one direction and restaurants serving raclette (melted cheese!) and pierre chaud (small pieces of meat + a heated rock to cook them on) and fondue in the other. Fantastique!

The weather was mostly kind too: a few beautiful clear days when you can see forever from the tops, some icy blasts, especially as we went over from one valley to the next, which kept us on our toes, and regular snow dumps to keep the trails powdery.

So a fortnight in the mountains, bookended by too short afternoons in Geneva and Montpellier. Now we're heading south again, but this time in search of some warmer weather...

My first day skiing was hindered by my recent crash, and I was a bit cautious, on the blues, at first, but by day 2 I was back to normal blues*. By day 4 I was skiing red* runs, and by day 7 I was up to blacks*!

We were staying in Méribel Centre, the heart of Les Trois-Vallées ski field. We were about 1 minute away from the piste aćess (slope access) and from there, one run away from the lift hub.

Our chalet was called Chalet Snowbel. It was a spacious two story chalet. We were looked after by a lady called Cat. She was from Bristol, But she has spent a lot of her time in Méribel.

During our stay, we made it to the highest and lowest points in the ski field, and the furthest east and west as well. In the skifield there are 321 runs, 66 of them being green, 207 being blue, 175 being red and 49 being black. There are 169 lifts in total.

We all had our fair share of crashes, our best being:

Overall, the mountains are (almost) always covered in a soft layer of powder snow, the lifts are well run, and the runs are kept in good shape. The ice is kept at bay on the easy slopes, and the mogels (lumps in the snow caused by lots of people turning in the same spot and making a sort of banked turn) on the reds and and blacks are always a fun challenge.

*These are the colours of the runs:

The thing that stood out the most for me in Montpellier is the pharmacy signs. The reason? They are all competing to be the most eye-catching. They all have animated signs, some having patterns, and others showing the time, date and other information. I even spotted a glasses shop with an animated sign!

Montpellier has a lot of churches, castles and medieval walls. One of these was quite close to where we were, and we visited it while exploring.

The trains in France are packed to capacity, with people ordering more tickets than there are seats. We were one of the unlucky ones, and ended up standing in the luggage zone. And to top it off, we got off at the wrong station and had to rush to get us and our bags, back on the train in time!

P.S. Jeff, you can rest assured that I did write my last post. I also wrote this one. So there.